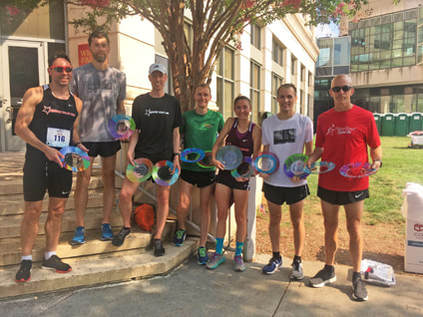 RVE Competes at Four on the Fourth

RVE celebrated Independence Day by coming out in force at the Four on the Fourth 4-Miler in Roanoke, VA. On what was an extremely warm, humid morning, teammates Harrison Toney and David Angell battled it out for the overall victory. The duo stuck together for three miles before Toney finally pulled away, getting the victory in 20:30 to Angell’s 20:45. It was a similar story on the women's side where Kerri Dalton and Sarah Glenn dueled all the way to the finish with Dalton edging Glenn by 5 sec, 24:54 to 24:59. In the team races, Toney and Angell teamed with Andrew Parkins, winner of the 30-34 age group, and Colin Munsey, winner of the Masters division, to take the Men’s team title. RVE also had a Mixed team, where Dalton and Glenn teamed with Paul Lenkowski (2nd in the 40-44 age group) and Matthew Wright (4th in the 40-44 age group) to take the win. 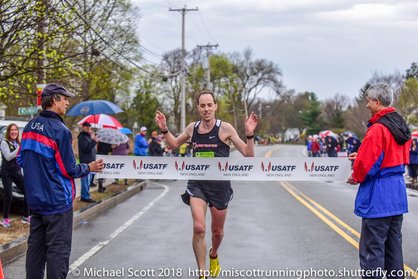 At the James Joyce Ramble 10k in Dedham, MA, David Angell defended his USATF National Masters 10k Championship, winning by 30 sec with a time of 32:32. Running aggressively, Angell went to the front from the gun and took control of the race around the one mile mark, which he passed in 5:06. From there he steadily pulled away from what was a talented field, running consistent splits in the 5:10/mile range. Not only did Angell defend his 10k title, but as was also the case last year, he won his second straight USATF Masters Championship, having won the 8k title in Virginia Beach in March. It was Angell's 7th 40-44 National Championship, and he will run for another Masters title at the Half Marathon Championships in Ann Arbor, MI, in June.
*Photo credit Michael Scott (https://miscottrunningphoto.shutterfly.com/) 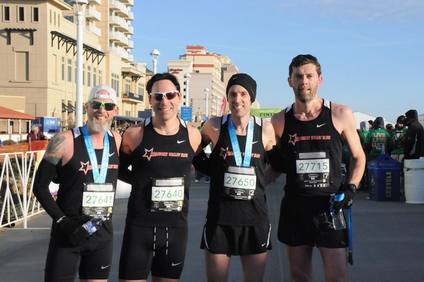 RVE’s David Angell repeated as USATF Masters 8k National Champion this past weekend at the Shamrock 8k in Virginia Beach. Angell’s time of 25:39 was good for a six-second victory over runner-up, Giovanni Pipia, from Atlanta, GA. This was the third time Angell has finished first overall at a USATF Masters Championship road race and also made for his 6th USATF National Championship in the 40-44 age division. 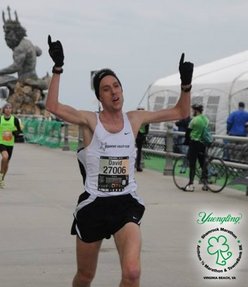 March 18, 2017 - After finishing third twice and fourth once in his first three USATF Masters National Championships, RVE’s David Angell won the Masters National 8k Championship on Saturday, March 17th, at the TowneBank 8k in Virginia Beach, VA. With a 2-mile split of 10:19, Angell opened up a significant lead on the Masters field early then negative split the race to beat runner-up Phillip Rolly by almost 30 sec. On what was a windy morning, Angell crossed the line in 25:24, which also put him second overall in the Open race. Angell will compete for another title at the USATF Masters National 10k Championships in Dedham, MA, on April 30th. 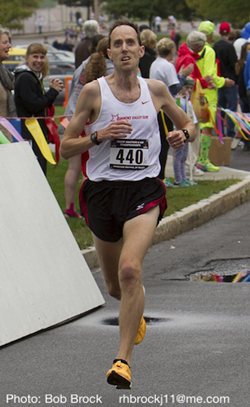 October 2, 2016 - On the very same day he turned 40, David Angell made his Masters debut at the USATF Masters 5k Championships, which were held as part of the Syracuse Festival of Races in Syracuse, NY. Going out hard, Angell hit the mile in 4:46, the halfway mark in 7:28, and went through 3k in a new PR of 8:59. He remained close to sub-15:00 pace at 4k, hitting that mark in 12:06, before fading a little in the last kilometer to finish with a road PR of 15:20. As they battled for the second spot on the podium, Angell moved ahead of eventual second place finisher, John Gardiner, with less than half a mile remaining, but Gardiner, who won the USATF Masters Mile title in August, finished with a huge kick, besting Angell by 7 seconds. Angell will now look to compete in the USATF Masters 15k Championship in Tulsa, OK, on October 29th.

Fore more coverage of the race, check out the VA USATF web site and the Running Professor. 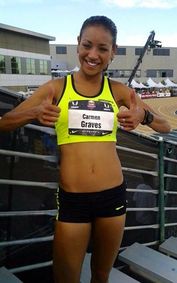 Graves Competes in the Steeplechase at the USATF National Championships

June 26-28, 2014 - Carmen Graves traveled to Sacramento, CA, to complete in the Women's 3000m Steeplechase at the 2014 USATF National Outdoor Track & Field Championships. Carmen was seeded 18th of 26 runners coming into the meet, but she placed sixth in Heat 1 on Thursday, June 26, to qualify for the final. Carmen's time of 9:47.28 was a PR by more than 8 seconds and was 11th fastest of those who qualified for the final. Less than 48 hours later on Saturday, June 28, Carmen toed the line in the final against the best women's steeplechasers in the nation. Battling 90 degree conditions, Carmen finished the final in 10th place with a time of 9:50.27, just a few seconds off her personal best from two days before. Special thanks to all those who made donations to RVE to help Carmen make this trip! 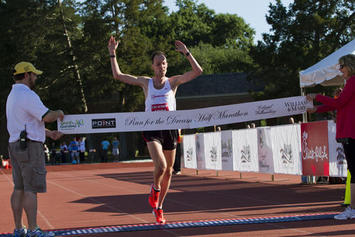 Angell Wins Run for the Dream Half Marathon

June 1, 2014 - David Angell won the Run for the Dream Half Marathon in Williamsburg, VA, in 1:10:33. Angell battled former Virginia Tech standout and previous winner of the Run for the Dream Half, Matthew Kroetch, over the challenging course, pulling away in the last third of the race to take the title by 80 seconds. Angell's win came just eight days after he set a 5k road PR of 15:22 at the AEP Festival 5k in Roanoke, VA. The Virginia Gazette coverage of the race can be found here and full results can be found here. 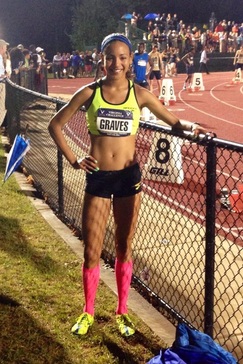 May 9, 2014 - Carmen Graves finished second in the invitational section of the women's 3000m steeplechase at the American Track League Virginia Challenge held at the University of Virginia in Charlottesville. Carmen's time of 9:56.62 was a 13 second personal best, bettering her previous mark of 10:09 set while winning the Penn Relays steeplechase a few weeks ago. Carmen did battle throughout the race with international athlete Maria Mancebo of the Dominican Republic, only being edged out in the last lap in spite of finishing the final 400m in under 75 sec. Full results can be found here. Carmen currently stands at #23 in the world this year in the women's steeplechase and she is just over a second and a half away from hitting the USATF "A" standard needed to compete at the US Outdoor Track and Field Championships to be held in Sacramento, CA, in late June. 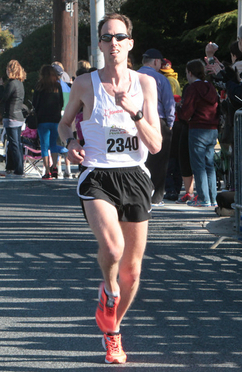 April 27, 2014 – David Angell made the trip to Rockville, MD, to compete on one of the fastest courses on the east coast at the Pikes Peek 10k. Angell was seeking a personal best time and got just that, running 31:04 to finish 13th overall and 2nd in the 35-39 year old age group. Although standards for the 2015 race have not been announced yet, Angell’s time was under the 10k standard required to qualify to the 2014 USATF Half Marathon Championships and Angell hopes to compete in that race again this coming year. He has qualified for the past two USATF Half Marathon Championships. 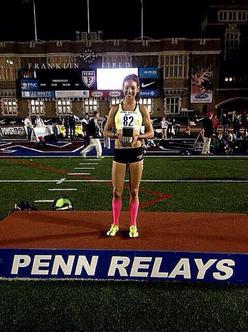 April 24, 2014 - RVE's Carmen Graves won the Olympic Development section of the women's steeplechase at the Penn Relays in a personal best time of 10:09.33. It was Carmen's second PR in the event this season, as she has lowered her best both times she has run the event in 2014. Her time is currently tied for the 14th fastest time in the United States this year and is one of the top-30 times in the world so far in 2014. Full results of the race can be found here.

April 12, 2014 - RVE's Carmen Graves won the women's steeplechase at the prestigious Sea Ray Relays this past weekend at the University of Tennessee in Knoxville, TN. Carmen's time of 10:11.45 was a significant personal best and put her almost 30 seconds ahead of the second place finisher. Her time was also the 17th fastest time in the world so far this year for the women's steeplechase. Full results of the race can be found here. 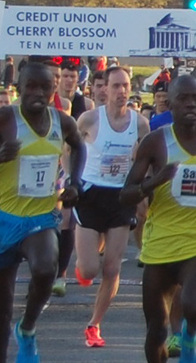 April 6, 2014 - RVE’s David Angell competed in the USATF Ten Mile Road Race National Championship this past weekend at the Cherry Blossom Ten Miler in Washington DC. Coming off some injury problems this past winter, Angell exceeded his expectations, finishing the race in 51:41, a 3-second PR. He placed 35th overall and was 23rd in the National Championship race. He also won his age division (35-39). Full results of the race can be found here. Angell will look to compete in both track and road races through the remainder of the spring and will be seeking a qualifying time for the USATF Half Marathon Championships to be held in Houston, TX, in January 2015. Angell has qualified for the half marathon championships the past two years and will be seeking to make it three in a row. He has a half marathon personal best of 1:08:29.